Seán and Jenny had a wild romance: fiery, adventurous, hungry… especially hungry. They both loved fine food and tried to visit a nice restaurant at least once a week.

Giddy on passion and reckless zest, they developed an eating-out routine which combined their shared taste for theatrics with a soupçon of adrenalin. This involved Seán rising from his seat mid-dessert and sinking to one knee before Jenny, producing with a flourish the unmistakable, iconic cube of a ring box, as every eye in the place turned to watch this age-old human fairytale.

They were good actors, and invariably Jenny’s happy Oh-darling-I-do! would elicit a round of applause. More importantly, it also brought material benefits: free drinks, at least, and sometimes – you’d be surprised how often – a torn-up bill. Cakes were produced, waitresses sang songs. There are at least three upmarket bistros in Dublin where you can still see, pinned up behind the bar, a yellowing Polaroid of the allegedly betrothed, toasting their fictitious future with champagne donated by the beaming manager who’s embracing them both.

Even if their romantic hamming hadn’t moved the boss, some well-to-do fellow patron might pull out his credit card, spurred to generosity by this sentimental reminder of the beauty and optimism of l’amour even in our uncaring, dog-eat-dog age. The world will always welcome lovers, after all.

On holidays the pair fished for every conceivable freebie by claiming to be on honeymoon. They even brought props to support their Bonnie-and-Clyde sham: wedding cards, a bridal veil, leftover confetti. Happy, daring, aphrodisiac times ensued.

But of course they were playing with fire. Not just the fire of potential discovery, but the fire that smoulders, usually undetected, in the hearts of the young and infatuated. The lie oft-repeated became an internalised truth. Jenny made certain assumptions, subconscious perhaps but no less important for that. Seán meanwhile remained blissfully non-committal as the years whizzed by and the pretend engagements mounted.

It could only end one way. After five years they parted. Badly.

Five more years passed, years of hard graft, hard knocks. Lessons were learned on both sides. And finally there was a reunion. In a different restaurant, surrounded by another crowd of strangers, peace was made. Dessert was ordered. And Seán produced another little jewellery box – this time for real.

Tears in her eyes, Jenny rose to her feet. “Too late, darling, too late,” was all she whispered as she walked away. There was no applause. Seán quickly settled the bill, dozens of sympathetic watchers pretending not to see, and left. 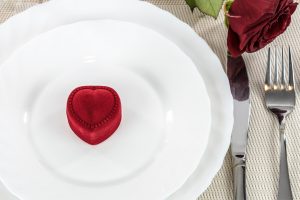